Tide Pod Poisonings and Problems Continue, Could be Prevented

The product liability lawyers at Saiontz & Kirk, P.A. are represent a number of families who are pursuing Tide Pod laundry detergent poisoning lawsuits and cases against manufacturers of other single-use laundry detergent capsules, which could cause infants and young children to suffer serious and devastating injuries. Has Your Child Suffered Poisoning From a Tide Pod Laundry Detergent Pack?

Although the manufacturers of these products have made some minimal attempts over the past year to reduce the risk of laundry detergent pod poisonings, reports continue to surface of children suffering injury after mistaking the small capsules for candy or chew toys.

If additional steps had been taken to increase the warnings and change the packaging for these products, many, if not all, of these problems could have been prevented.

A Chicago grandmother has recently started a petition on Change.org asking Proctor & Gamble to make simple changes to the packaging of Tide laundry pods, after her 15 month old grandson suffered chemical burns and internal injuries.

The petition simply suggests that Tide Pods should be individually wrapped in a way that makes them less appealing to infants and children, something the manufacturer has so far avoided doing, apparently placing their desire for profits before the safety of children who may come in contact with their brightly colored and candy-like capsules.

Unfortunately, the story of this Chicago grandmother is not unique. According to data released by the American Association of Poison Control Centers, more than 6,275 reports were received by poison centers in 2012 involving exposure to the highly concentrated packs of laundry detergent by children 5 and young. As marketing for Tide Pods and other products has continued, this year at least 7,669 kids 5 and younger have already been exposed to single-load laundry pods between January 1 and September 30, 2013.

Due to the inadequate warnings provided by the manufacturer, many parents do not recognize the extreme risk posed by laundry detergent poisoning. 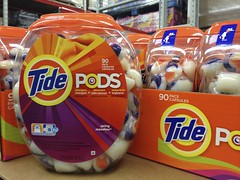 Over this year, Proctor & Gamble has made some minor changes to the warning label and packaging, but they still have not gone far enough to protect kids from this attractive nuisance.

In July, a warning label was placed on the containers and they have agreed to change the containers to make them more difficult for children to open. However, many parents of children who have suffered devastating injuries continue to ask why they need to be sold in such a way that would encourage children to mistake them for something that should be placed in the mouth.

Another petition filed on Change.org also highlights problems with the new Tide Pod warning labels, which indicated that parents should give children who ingest the laundry detergent milk. The petition argues that this is bad advice that makes children more ill, and may delay necessary emergency treatment.

The U.S. Centers for Disease Control and Prevention (CDC) issued a report last year highlighting the dangers laundry detergent pods pose for young children. The CDC described how many children initially suffer symptoms of spitting and vomiting, which may quickly progress to more severe symptoms, such as profuse vomiting, mental status changes, respiratory distress and seizures.

The U.S. Consumer Product Safety Commission has warned parents to make sure the products are kept far out of reach of children and to immediately contact Poison Help at (800) 222-1222 if a child swallows or chews on a laundry packet or suffers eye exposure.

All cases are reviewed by our law firm on a contingency fee basis, which means that there are never any out-of-pocket expenses to hire a lawyer and we receive no attorneys fees or expenses unless a recovery is obtained.