Find Out If You Qualify For a
PARAQUAT PARKINSON'S CASE

Exposure to Paraquat Herbicides May Increase The Risk of Parkinson’s Disease. Lawyers at Saiontz & Kirk, P.A. Can Help!

Farm workers, herbicide applicators and other individuals with Parkinson’s Disease caused by Paraquat Exposure may be entitled to settlement benefits and financial compensation, including:

The product liability lawyers at Saiontz & Kirk, P.A. are reviewing potential class action lawsuits and individual injury claims against the manufacturers of Gramoxone and other paraquat weed and grass killers, for failing to warn about the risk of Parkinson’s disease associated with the toxic herbicide.

Although manufacturers have known about the link between paraquat and Parkinson’s disease, as well as other serious health risks, the herbicide has been distributed and sold without adequate warnings, even for “certified applicators.”

Compensation may be available through a Paraquat lawsuit for individuals diagnosed with Parkinson’s disease following exposure to the toxic herbicide, including:

The costs and impact of a paraquat Parkinson’s disease diagnosis can have a devastating impact on families and individuals left with the progressive and debilitating disease. Paraquat settlement benefits may be available through a lawsuit.

All cases are reviewed by the Parkinson’s disease lawyers at Saiontz & Kirk, P.A. on a contingency fee basis, which means that there are never any out-of-pocket costs associated with hiring our law firm and we only receive an attorney fee or expenses if a recovery is obtained for you and your family. Request a free consultation and paraquat case evaluation.

Paraquat is a controversial herbicide used for weed and grass control. It is a cheap and fast acting product, which has been credited with the growth of “no-tilling farming” in the United States. However, it carries serious risks that have not been adequately disclosed by the manufacturer for decades. 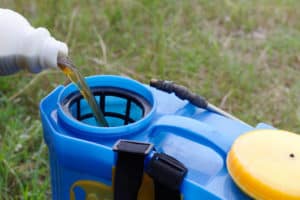 Since it was first introduced in 1962, paraquat-based products have been sold by Chevron Chemical Company, Syngenta and other companies under a variety of brand names, including:

Due to the unreasonable risk of Parkinson’s disease from paraquat and other serious heath risks, at least 32 countries have entirely banned use of the herbicide. However, use of the product in the United States has actually increased, with a U.S. Geological Survey indicating a doubling from 2013 to 2017, when estimated use of paraquat reached 10 million pounds annually.

Parquat is known to be a toxic weed and grass killer, which is lethal at very low doses. As a result, regulators in the United States have registered Paraquate as an RUP (Restricted Use Pesticide), which can only be purchased or used by certified “licensed applicators”.

While the required training provides information about paraquat toxicity, including the risks associated with misuse, this does not replace the manufacturer’s obligation to provide adequate warnings about the Parkinson’s disease side effects that can result even with the proper use of paraquat.

As a result of the decision to place the desire for profits before the health and safety of Americans, financial compensation and benefits may be available through a Paraquat Parkinson’s Disease Lawsuit.

FIND OUT IF YOU HAVE A CASE

To avoid the risk of paraquat poisoning, the EPA requires that “Certified Paraquat Applicators” go through a training program before they are allowed to mix, load or apply paraquat. In addition, the manufacturer adds a color dye to the herbicide, a strong odor and a chemical agent that causes someone who ingests it to vomit.

However, these warnings and safety measures remain ineffective protection against the known paraquat side effects. Even when precautions are taken and recommendations are followed, paraquat exposure may still occur through:

Once it enters the human body, paraquat can result in oxidative stress, which causes cells to degenerate and die. Oxidative stress is a major contributing factor in Parkinson’s disease, and even low levels of exposure to paraquat can mimic cellular changes that are associated with the development of Parkinson’s.

Link Between Parkinson’s and Paraquat

Parkinson’s disease is a chronic and progressive brain disorder that causes shaking, stiffness, difficulty walking and other debilitating symptoms that get worse over time.

While many people believe that genetics are the cause of Parkinson’s, research has shown genes are only believed to be primarily involved in about 1-in-10 cases of Parkinson’s. Herbicide and pesticide exposure is increasingly considered one of the leading risks, especially when combined with other factors that contribute to the development of Parkinson’s.

Over the past decade, an increasing number of studies have highlighted the link between Parkinson’s and paraquat, finding that farmers, applicators, mixers and other handlers of the herbicide are multiple times more likely to be diagnosed with Parkinson’s disease.

Researchers have identified a mechanisms of action that explains the link, indicating that exposure increases production of certain oxygen derivatives that harm cellular structures and make it more likely to be diagnosed with Parkinson’s disease.

The evidence linking paraquat to Parkinson’s is so strong that scientists commonly use the chemical to artificially create Parkinson’s symptoms in animal test subjects while studying the effects of the disease.

Symptoms of paraquat-induced Parkinson’s disease may emerge with a number of early signs before a full diagnosis, including:

Parkinson’s disease problems may also include behavioral changes, depression, apathy, anxiety, insomnia, fatigue, memory and cognitive changes. Other physical side effects could include difficulty swallowing, drooling, facial masking (where the expression permanently appears depressed or angry), dizziness, stooped or hunched over appearance, pain, loss of smell and other symptoms.

Study published in Nature Chemical Biology indicated that paraquat kills cells through a mechanism known as oxidative stress, which is a factor in Parkinson’s disease

The Unified Parkinson’s Advocacy Council sent a letter to the EPA, urging the agency to deny re-registration of the herbicide due to the strong evidence of paraquat Parkinson’s risks

Manufacturers of paraquat-based herbicides have failed to ensure that farm workers and others exposed to the grass and weedkiller were adequately warned about the risk of Parkinson’s disease. Lawyers at Saiontz & Kirk, P.A. are reviewing potential Paraquat Class Action Lawsuits and individual Parkinson’s Disease Claims for individuals throughout the United States, alleging:

No Fees or Expenses Unless You Receive a Paraquat Settlement

All Paraquat Parkinson’s Disease lawsuits will be handled by our attorneys on a contingency fee basis, which means that there are never any out-of-pocket expenses to hire our law firm and we only receive a fee if compensation is secured for our client.

Protect your family and find out if you or a loved one may be eligible for Paraquat Settlement. Request a free consultation and case evaluation.

CONTACT A PARAQUAT LAWYER No Fees or Expenses Unless a Recovery is Obtained.